The Systems Framework is substantially different to traditional analysis of water resources in many key areas. The process includes detailed forensic analysis of a wide range of biophysical parameters throughout Greater Melbourne. The Framework is an integrated systems model that has been updated and enhanced for use incorporating the latest results from ongoing independent research into analysis of water cycle systems.[1] These systems models subdivide a region or city into hierarchies of distributed linked zones that represent opportunities, constraints and feedback loops across multiple scales. Long sequences of spatial climate data were combined with local water use and demographic information across the entire region. Daily time steps are employed to increase the depth of analysis. This process maintains the long term climatic correlation between urban and water supply catchments. This ensures that urban water demands are temporally and spatially consistent with the rainfall and stream flows in water supply catchments. The Systems Framework is substantially different to the current practice of separate derivations of water demands and yields from water resources that utilise monthly or annual assumptions. Importantly, this analysis combines the entire water cycle including water demands, wastewater discharges, stormwater runoff, waterways, energy and the environment at multiple locations throughout a region or city in a single integrated system. This unique process provides a powerful numerical framework that allows understanding of trade-offs, costs and benefits of current and alternative strategies across the entire water cycle. The Systems Framework includes a dynamic financial and economic investment framework. In addition, the Systems Framework includes climate dependent behavioural models of water demands that also respond to a range of socio-economic and demographic drivers. Rather than using average water demands for households with average responses to alternative strategies, the Systems Framework evaluates the temporal and spatial performance of alternatives throughout the system. Analysis using the Systems Framework has also recently completed a similar analysis for Greater Sydney that was subject to comprehensive peer review and feedback.[2] The quasi parallel processes of refining the first principles systems analysis for the water cycles in Greater Sydney and Greater Melbourne has also contributed and enriched the processes underpinning the Systems Framework. The first investigation of alternative water strategies in Melbourne for the Department of Sustainability and Environment (DSE) by Dr. Peter Coombes commenced in 2006.[3] This project combined data from DSE, DPCD and water authorities with a series of workshops to refine the Systems Framework for Greater Melbourne. This process was further underpinned and complemented by analysis of integrated water cycle management (IWCM) Options for new growth areas in the Geelong region.[4] This project included comprehensive engagement with the development industry and local government resulting in further development of the demographic, socioeconomic and economic processes in the systems methodologies. This process was enhanced by interaction with real development issues on a large scale. These activities led to an invitation and subsequent submission to the Victorian Parliament’s Environment and Natural Resources Committee. The submission involved further refinement of the systems analysis to extract more detailed understanding of water resources available within Greater Melbourne and barriers to alternative business models that can facilitate the use of these resources. Methodologies for Systems Framework were extended for the analysis of a wide range of major projects including the Werribee Employment Precinct [5], Doncaster Hill [6] and Egate. This knowledge assisted with the development of alternative water policy for Greater Melbourne and was combined in the provision of systems analysis and advice for the Living Victoria Ministerial Advisory Council. The process involved a cycle of feedback with the MAC and a range of stakeholders.

Overview of the Systems Framework

This section provides an essential overview of the historical development of the Systems Framework and a range of existing key inputs. It is important construct the systems analysis from the basic elements (the local scale inputs) that drive system behaviours. It is also critical to understand and account for first principles transactions within the system to allow simulation of spatial and temporal performance of the system. This allows simulation of the response of the system to perturbations such as analysis of Options and Scenarios. Biophysical systems in a region are constructed using three basic components: Sources –  Regional and local water sources, catchments and waterways Flux – transport and treatment of water, sewage and stormwater throughout the region Sinks – Stormwater runoff and wastewater disposal to waterways The fundamental construct of this novel approach is outlined in the following Figure. 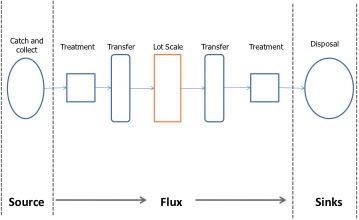 The principles underpinning any water system – Sources, Fluxes and Sinks

The Figure shows that the foundation principles used as the basis of the Systems Framework – the behaviour of a system is driven by demands at the lot scale (including water, sewage, stormwater and environmental demands or discharges) that require movement of water (Fluxes) from a range of sources and disposal of water (such as sewage and stormwater) to a range of sinks.

The framework for analysis of the Systems Framework was compiled from the lot scale to regional scale as presented in the Figure below. 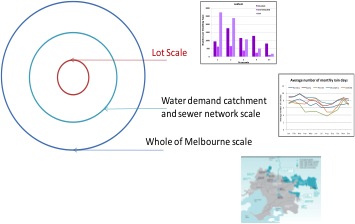 This Figure shows the foundation principle used as the basis of the Systems Framework, namely that the overall system is driven upwards by demands at the lot scale (including water, sewage, stormwater and environmental demands or discharges).  Further, it shows that these demands require both movement of water (fluxes) from a range of sources and disposal of water (such as sewage and stormwater) to a range of sinks. An overview of the methods used to implement this upwards focussed analysis framework is presented in the following Figure. 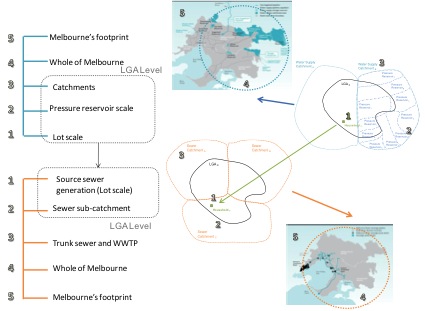 The above Figures highlight the elements that were incorporated at different scales in the Systems Framework. This includes water use and demographics at the local scale, distribution infrastructure and information at the sub-regional or local government scale (the middle scale), and regional behaviours or infrastructure such as water extractions from and discharges of sewage to wastewater treatment plants. This process can be described as analysis of systems within systems across multiple scales. Our unique biophysical and scale transition framework links the dynamics of the systems with inputs across scales and time. The analysis is anchored by a regional framework of key trunk infrastructure, demand nodes, discharge points, waterways and regional sources of water in a network model. Major water distribution, stormwater, sewage, demographic, climate and topographic zones are combined in this part of the framework. This process compiles inputs from a wide range of commonly utilised analysis tools, including for local water demands and water balances and hydrology.  Key simulation inputs to this framework include:

This framework incorporates the movement of water throughout the region and connectivity to the water supply headworks system. Similarly, the framework includes the movement of sewage throughout the region and connectivity with discharge points or reuse systems. It includes stormwater catchments, conveyance systems and urban streams. Importantly, the framework shown in the above Figures is driven by long sequences of spatially and temporally consistent input data that captures the spatial and temporal variation in climate (rainfall, temperature and frequency of rainfall), demographics, water demands and water management strategies across any region. This ensures that the impact of the considerable spatial and temporal variation and connectivity across a region is robustly incorporated in the framework leading to accurate understanding of internal and external augmentation requirements. Clearly a region does not respond “on average” and this process captures the dynamics of feedback loops from sources to sinks throughout the region. This is a contrast to traditional analysis that assumes that the system response is top down in response to spatial or temporal averages. For example, this framework provides comprehensive systems understanding of the dynamics of sewage discharges, including interaction with stormwater systems, to sewage treatment plants and the impact of reusing treated effluent from the contributing sewage catchments. It promotes an understanding of the changes in sewage flows, demands for recycled water and requirement for reuse infrastructure throughout the region with the consequent changes in distribution of water from external sources (such as desalination and the north south pipeline throughout the Greater Melbourne region). This allows understanding of the changed energy profiles, the extent of reuse required and the operating costs of any strategy. In addition, this connectivity allows understanding of the regional water security and resilience to climate change provided by an alternative Options – a proportion of a city’s water security will be provided by internal sources. Wherever possible the analysis incorporates first principles information and sequences of inputs rather than averages.  Smaller scale inputs to the regional framework involve more detailed analysis of residential, commercial, industrial and agricultural areas. This analysis includes the dynamic inputs of local infrastructure and building form to the regional framework. Details of the analysis, extractions from the data and modelling process have been provided throughout this Section to assist with understanding the processes used in the Systems Framework. Household water consumption was selected in this study as representing base water use behaviours for a region during a period relatively free of water restrictions. These water demands were then modified by a range of processes including adoption of water efficient appliances in some houses, connection to wastewater reuse systems and changes in demographics. 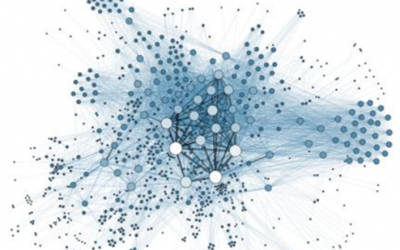