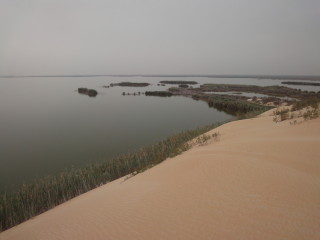 The Al Hasa region has a population of about 1.3 million people and is located in the eastern province of Saudi Arabia about 60 km from the Arabian Gulf. The region includes the renowned Al Hasa Oasis and the largest irrigation network in Saudi Arabia. This irrigation network is dependent on water extracted from aquifers and discharges excess water via an extensive drainage scheme to the Al Oyoun and Al Asfar Lakes.

Water discharges to the Al Asfar Lake from Al Hasa via the D2 drain. The system of lakes includes a large reed lake, and Summer and Winter lakes. The reed lake has been created by nutrient rich inflows and the Summer lake overflows into the Winter lakes during periods of low evaporation and high inflows. The Lake system has a history of discharging to Arabian Gulf.

Dr. Peter Coombes was commissioned to lead the investigation of the viability of the lake, develop an understanding of water quantity and quality aspects, and the potential strategies for optimising the potential of Al Asfar Lake. This investigation included leadership of and collaboration with a team derived from a range of local agencies to provide an overview of an integrated systems analysis of the hydrology and water quality processes at Al Hasa that impact on Al Asfar Lake.

The Al Hasa region has a severely arid climate that is characterised by low average annual rainfall of 68 mm and high annual evaporation of 3,204 mm. The Al Hasa region will also be subject to the impacts of climate change that may impact on the long term viability of the Al Asfar Lake. It is expected that the region, before 2100, will experience a 23% to 40% increase in rainfall, a 14% increase in evaporation, a 17% to 30% decrease in recharge to aquifers and a 12% loss in soil moisture. 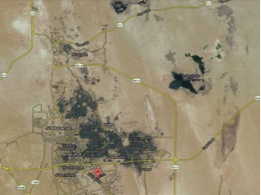 A forensic analysis was undertaken to develop a systems understanding of the project. This process compiled information from research, publications and data to construct a preliminary water balance for this study. The Al Hasa irrigation and drainage scheme was developed in 1971. In 1988, the scheme included 1,482 km of open concrete channels that distribute water extracted from the Neogene aquifer to 22,000 farms that occupy a land area of 7,096 ha. The average annual water use for irrigation was 328,000 ML. The total annual recharge from rainfall to the Neogene aquifer was estimated to be 500,000 ML.

The irrigation scheme is reported to have a low overall efficiency of 39%, including efficiencies for water conveyance, operation and field application of 88%, 80% and 55% respectively. As a consequence, in 1988, an annual volume of about 111,000 ML of excess irrigation water discharged to the drainage network and ultimately to Al Asfar and Al Oyoun Lakes. The Al Oyoun Lake has historically discharged to the Arabian Gulf. 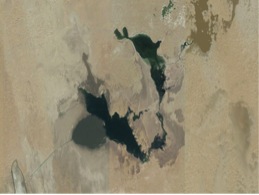 It is expected that the subsequent irrigation of an additional 4,438 Ha has increased annual discharges to the drainage system to about 176,000 ML. The proportions of this excess irrigation water that discharges to Al Oyoun Lake and Al Asfar Lake was unknown.

In 1988, about 12,000 ML of water from the drainage system was recycled for irrigation use. It is expected that this volume is currently about 18,000 ML. In addition, in 2010, an annual sewage volume of 65,700 ML discharges to wastewater treatment plants in the Al Hasa system. This allowed the determination of domestic water use. A proportion of the wastewater, 12,780 ML/annum, currently discharges to the D2 drainage system and Al Asfar Lake.

During 2009, the Departments of Water and Sewage, and Agriculture advised that effluent from wastewater treatment plants will be utilised for irrigation instead of discharging to the D2 drainage system. This implies that flows in the D2 Drain will be primarily dependent on surplus irrigation water and flows to Al Asfar Lake may reduce in the future. Al Asfar Lake is also fed by rainfall, stormwater runoff and leakage from other water schemes. The lake is also subject to evaporation losses.

This investigation has utilised a range of published resources to create an overview the viability of Al Asfar Lake. It is also essential to highlight uncertainty about a range of commentary. An improved understanding of the water balance at Al Hasa and, as a result, the accuracy of the analysis of the viability of the Al Asfar Lake required the following actions:

This investigation also includes a range of observations that were combined with the historical information to produce a more accurate understanding of the performance of the water balance in Al Hasa. Some of the gauging locations that are used by the irrigation authority (HIDA) to measure flows in the drainage system. 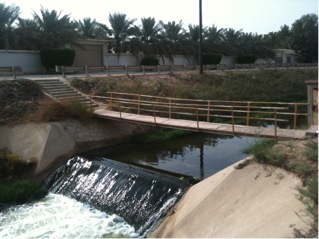 The performance on the Lake system is also dependent on the bathometry of the Lakes and surrounding topography. A hydrographic survey of the lake systems was conducted using satellite positioning and direct measurements of water depths. The observations of water depths and global positions from the field survey were used as a “ground truth” for a digital elevation model (DEM) obtained from the Shuttle Radar Topography Mission (SRTM) conducted by NASA (National American Space Agency). This field survey allows understanding of water depths that cannot be measured by remote sensing from satellites. In addition, land surveying techniques were used to measure elevations and water surface levels at various locations around the Lake system. 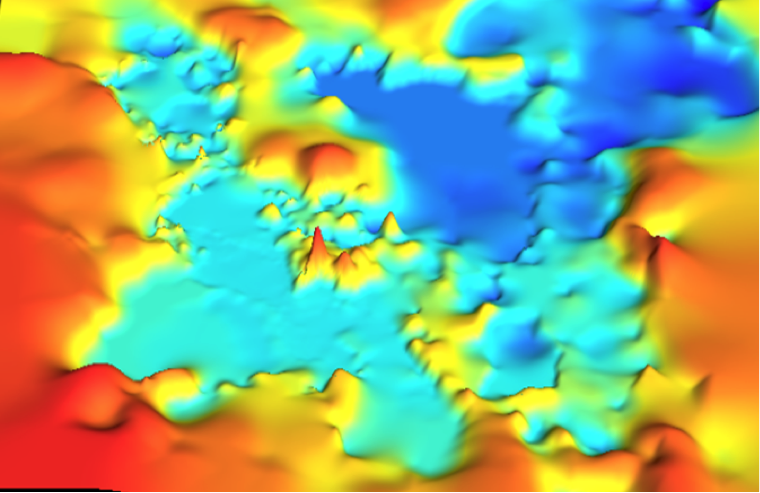 The digital elevation model (DEM) derived from SRTM was corrected using observations from the field survey to create the preliminary two and three dimensional models of the Al Asfar Lake system. Note that the Winter lake system includes a range of linked storages that are at lower elevations than the Summer lake. The Al Asfar lake system operates as perched lakes that surcharge towards lakes at lower elevations. During periods of higher temperature and evaporation the various lakes in the system are separated. This phenomenon was confirmed by field investigations. Note that the upper and lower lake systems are connected by waterways.

The observed inflows to the Al Asfar lake system, and areas and volumes of the lakes were used in a hydrological model to simulate the performance of the system. This analysis utilises continuous simulation of climate and water demands to understand the seasonal variation of impacts on the Al Asfar Lake.

A number of site inspections have revealed that Al Asfar Lake is a long established and functional ecosystem that shows some resilience to considerable pollutant loads entering the system. In addition, the lake system supports significant bird life. Data collected from limited sampling for selected pollutants in the D2 Drain and within Al Asfar Lake were utilised to understand the water quality impacts on the Lake.

Sewage effluent in the D2 Drain

The Al Asfar Lake is an established and functioning ecosystem that has coped with considerable pollutant loads. Inflows to the Lake are mainly dependent on surplus irrigation water with some contributions from leakage from water supplies to urban areas, stormwater and effluent from wastewater treatment plants. There is sufficient water available to ensure the viability of Al Asfar Lake.

High concentrations of nitrogen (N), phosphorus (P), Biological oxygen demand (BOD), Chemical Oxygen Demand (COD) and salinity discharge to Al Asfar Lake from the D2 drain. It is expected that the majority of BOD, COD and N originates from wastewater, and leachate from irrigation provides the majority of P and salinity. The Lake has a considerable concentration of salinity that is derived from accumulation and evaporation.

The results of this study suggest that the Lake ecosystem has some resilience to the inputs as evidenced by reductions in N, P, COD and BOD. However, elements such as Iron and Salinity appear to accumulate in the system. Previous studies did not find pesticides in the water and identified insignificant concentrations of heavy metals. The Al Asfar Lake contains significant nutrients and biological oxygen demand that reduces available oxygen in the water. This survey also revealed insignificant concentrations of heavy metals and did not detect pesticides except of a low concentration of diazinon in a single sample.

The D2 drain delivers substantial loads of N, P and BOD that impose considerable oxygen demands on the Lake’s ecosystem. This drives depletion of oxygen and growth of algae in the Lake that can lead to anaerobic conditions that are harmful to flora and fauna. In addition, salinity and associated pollutants may accumulate in the Lake. These processes are combining to challenge the emerging ecosystem that is Al Asfar Lake. The resilience of the Lake’s ecosystem is certainly impacted by the continuous inflow of wastewater that contains high levels of nutrients, biological oxygen demand and suspended solids.

Surplus irrigation water will also contain significant loads of nutrients, BOD, salts and suspended solids. The continuous inflows of high pollutants loads from the D2 Drain inhibit the ability of the Lake’s ecosystem to recover from these past inputs. In addition, the Lake is also subject to significant inflows of litter.

There has been considerable conjecture about the quality of sediments in Al Asfar Lake. Previous investigations revealed that the lake has a sandy bottom that is relatively free of sediments. This investigation revealed that nutrients and low concentrations of metals have accumulated in the sediments of the Lake. A wide range of heavy metals and nutrients were not found in the sediments.

Similar to previous investigations, this spatial survey of water quality in the Lake has revealed that higher salinity was found in the east and lower salinity in the west. Similarly, the nutrient loads and biological oxygen demand was higher closer to the reed lake, and lower in the main body of the lake. It is clear that the substantial reed lake is operating to remove sediments and nutrient loads from water entering the lake and salinity accumulates in the lower reaches of the lake.

Conceptual design of a treatment train for the lake

The water quality treatment train should include three main stages, namely removal of gross pollutants, rapid settlement of sediments with particle size greater than 250 μm using clarification, and filtering and oxygenation via rock or reed lined riffle systems prior to entering the existing reed bed. This treatment train will need to be combined with a waste management strategy.

The treatment train utilises the kinetic energy and depth of water flows in D2 Drain at each location. The appropriate location is also chosen for each treatment measure within the system for each of the key contaminants of concern. Thus the higher velocities in the D2 Drain (1.2 m/s to 0.8 m/s) and greater depth of flow prior to entering treatment system are effectively utilised to allow removal of litter, coarser sediments and BOD.

Slower velocities are experienced at the end of passage through the clarifier before water overflows via a weir into the rock cascade and filter system which adds kinetic energy to the water flows. Then the treatment train expands to create flows of lower depth and velocity to facilitate oxygenation. The water then accumulates at the rock filter allowing removal of smaller sediments.

Water then flows at a lower velocity through the cascades with reed islands and passes through the macrophyte buffer strip into the final oxygenation pond. Finally the treated water flows into the existing reed lake.

This investigation has revealed that the Al Asfar Lake system is actually a network of perched lakes that overflow and cascade towards lakes at lower elevations. The Winter Lake is located at a higher elevation than the Summer Lakes.

An outstanding success of this project was the mentoring and collaboration with a local team derived from multiple agencies from the Al Hasa region.