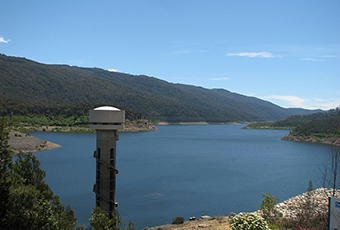 The purpose of this investigation was to provide systems analysis of the water cycle for Greater Melbourne and advice in support of the Ministerial Advisory Council (MAC). This process aimed to generate discussion and deeper understanding of the detailed transactions that drive water cycle management throughout the region.

This alternative view was used as a basis for the implementation of the Living Melbourne, Living Victoria policy and this report supports the recommendations in the MAC’s final Stage II report.

An integrated systems approach was employed by this study to analyse the performance of integrated water cycle management Options throughout the Greater Melbourne region. Options were determined to generate understanding of the response of the water cycle systems within Greater Melbourne to alternative strategies and to subsequently inform decision making for water policy.

This unique analysis was dependent on detailed local inputs throughout the system, such as demographic profiles and human behaviour, and linked systems that accounts for water supply, sewage, stormwater and environmental considerations. The systems analysis was built on local scale (the people) inputs (a “bottom up” process) rather than traditional analysis of metropolitan water resources that commences with regional scale assumptions (a “top down” process).

This project has utilised the powerful framework for detailed systems analysis of the Melbourne region that has been developed over a long period of continuous investigation. Three decades of research, two separate investigations (the previous investigation commenced in 2006) and a year of dedicated analysis have enabled a robust analysis.

Four alternative options were examined for water cycle management within Greater Melbourne. The performance of each Option was compared to the performance of the Business as Usual (BAU) Option.

The purpose of establishing Options was to facilitate testing of the physical, technical and commercial performance of the system without the influence of opinions, perceptions and agenda. Defining a base case (Business as Usual) and alternative Options enable the testing, comparison and understanding of the behaviour of the Greater Melbourne system. This study did not seek to pick an endpoint or to provide a detailed design of the Options. It provides useful insight into systems behaviour that can inform decision making.

These Options were established to test, compare and contrast a range of alternative future states. Note that each Option is also subjected to a range of naturally variable climate scenarios. The alternative Options are described in Table E1.

Scenarios describe the potential changes in qualitative drivers that may influence the behaviour of the system. These qualitative drivers create behaviours that may be experienced by any Option. The consequent plausible alternative futures test the viability of the Options. The Scenarios applied to each of the Options for water cycle management throughout Greater Melbourne examined in this study are summarised in Table E2.

This unique analysis is dependent on detailed inputs, such as demographic profiles, and linked systems that accounts for water supply, sewage, stormwater and environmental considerations.

The systems analysis was constructed from the basic elements (the lot scale inputs) that drive system behaviours and account for first principles transactions within the system to allow simulation of spatial performance of the system. Biophysical systems in the region were constructed using three basic components:

The analysis is anchored by a regional framework of key trunk infrastructure, demand nodes, discharge points, waterways and regional sources of water in the systems model.

Major water distribution, stormwater, sewage, demographic, climate and topographic zones are combined in this framework. This process compiles inputs from a wide range of commonly utilised analysis tools, including for local water demands and water balances and hydrology. Key inputs to this framework include:

Details of the analysis, extractions from the data and modelling process have been provided throughout this report to assist with understanding the systems processes used in this study.

Household water consumption for the period 2005 to 2006 was selected in this study as representing base water consumption for the region during a period relatively free of water restrictions. These water demands were then modified by a range of processes including adoption of water efficient appliances in some houses, connection to wastewater reuse systems and changes in demographics. The economic analysis was based on the 2009/10 financial period.

Most parameters relevant to water cycle management are subject to significant spatial variation throughout Greater Melbourne. These include climate, water demands, wastewater generation, stormwater runoff, socio-economic and demographic profiles, and the cost of providing water and wastewater services.

The water cycle for Melbourne cannot be described by homogenous parameters based on a single location or even regional averages. Similarly, this study has shown that the existing performance of the Greater Melbourne system or its response to policy changes cannot be based on single parameters or solutions. In particular, the existing system (BAU) is critically dependent on (or sensitive to) variations in climate and population.

The expected increases and accumulation of wastewater and stormwater in water cycle networks are significant challenges for Greater Melbourne. This investigation has found that up to three additional augmentations of the regional water supply system may be required. A summary of requirements for augmentation are presented in Table E3.

The ULT Option that includes multiple sources of water and efficient use of water eliminate requirement to augment regional water supply.

It is noteworthy that the high emissions (HE) and low emissions (LE) generate requirement for additional regional water sources for all Options expect the ULT Option. In addition, the BAU Option includes up to three augmentations and requires continuous operation of desalination plants which the alternative Options require use of desalination when total water storage in regional dams are drawn down below 65%.  In addition, the alternative Options BASIX, ULT and ULT1 eliminate the requirement for additional water supplies. The results of this study are summarised in Table E4. 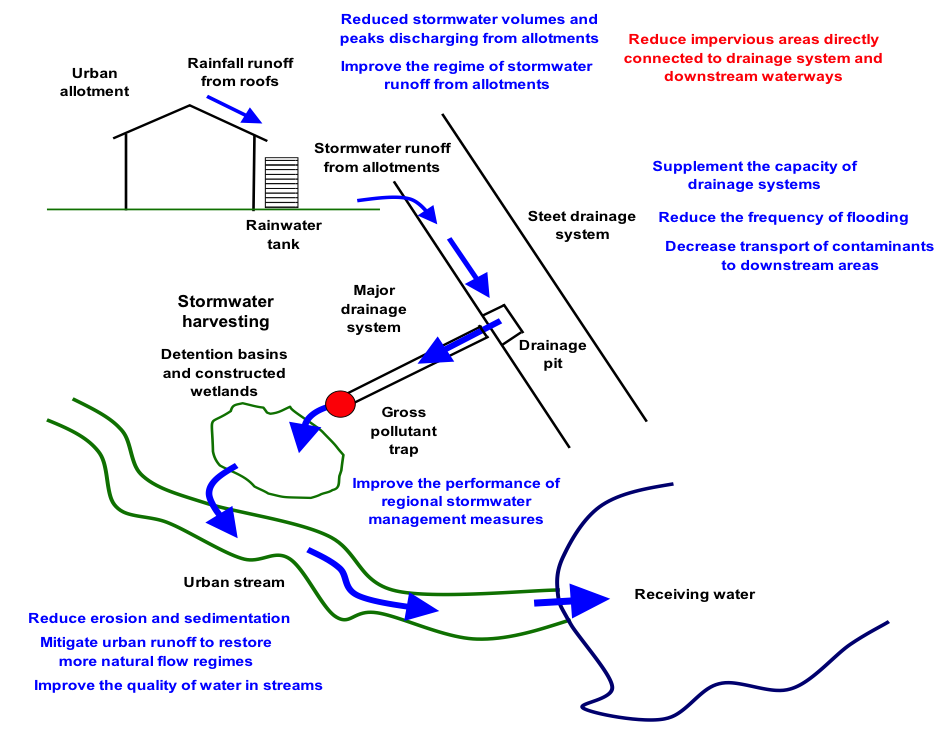 Impact of rainwater and stormwater harvesting on the water cycle

Table E4 reveals the key findings of this study that include:

This study used detailed systems analysis to compare the spatial capacity and potential spatial performance for each Option.  These are defined as follows:

The study found that buildings and households across Melbourne have the capacity to achieve significant reductions in water demand, wastewater discharges and stormwater runoff. The use of a spatially explicit modelling framework in this study was able to show that this capacity varies across Melbourne. All Options provide reasonably consistent capacity outcomes that result in substantial reductions in water demands, wastewater discharge and stormwater runoff for all locations across Greater Melbourne.

The spatial variation in performance of Options is driven by a multitude of factors including rainfall, proportion of residential and non-residential buildings, the age of suburbs, the condition of existing infrastructure and the distance to and from water supply sources and wastewater treatment facilities:

The Options considered in this study provide the following key outcomes: