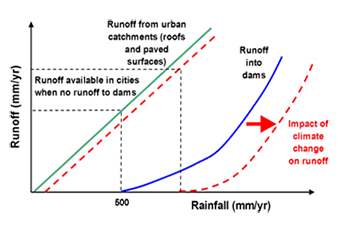 This study has analysed the relative efficiencies of runoff into dams supplying Brisbane, Melbourne, Perth and Sydney, and of rainwater harvesting in those cities. It is shown that both respond differently to drought and climate change forcing, with rainwater harvesting systems in cities exhibiting a more uniform performance across these stressors. The impact of natural variations in climate is considerable, with the inland catchments that supply cities exhibiting a disproportionate decrease in yield in response to rainfall reductions, as compared to roof catchments in the cities. A 50% decrease in median rainfall at each location results in a 60% to 85% reduction in runoff to dams and a 15% to 30% reduction in yield from 3 kL rainwater storages. Rainwater yields from 3 kL storages in the cities were more resilient to the potential for climate change than runoff into dams supplying the cities. Reductions in runoff from the worst case climate change scenario ranged from 19% to 53%, while reductions in yields from rainwater harvesting systems were 5% to 8%. Yields from rainwater harvesting in cities were also more resilient to droughts than runoff into dams. This study highlights the potential for rainwater harvesting in cities to supplement water supply from dams during droughts and to buffer the expected impacts of climate change.